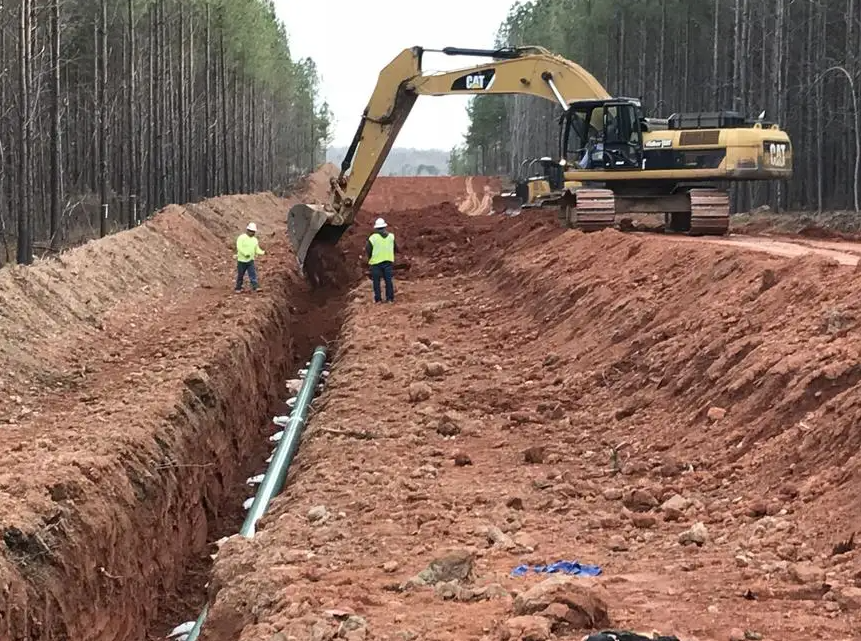 Bolt by bolt, a major pipeline is running toward South Carolina.

Conservation advocates fear it could mean that exporting natural gas from the state is getting closer to reality. It would be one of the more controversial fallouts from the sale of SCANA to Dominion Energy, if that agreement actually goes through.

The 600-mile Atlantic Coast Pipeline being built by Dominion is projected to pump 1.5 billion cubic feet per day of gas fracked from the ground under various Northern states.

It would run from West Virginia to North Carolina.

It could be expanded to cross into South Carolina near the mixing of Interstate 95 and South Carolina’s inland port shipping facility near Dillon, conservationists say. The route would put it on a line to continue on to ports such as Georgetown or Charleston, they warn.

A Dominion spokeswoman said that’s not part of the company’s current plans.

“Dominion Energy has not proposed any expansion of the Atlantic Coast Pipeline beyond what has already been approved by the Federal Energy Regulatory Commission,” said spokeswoman Kristen M. Beckham.

Extending the pipeline into South Carolina could give fracking companies a much sought-after larger East Coast port from which to export gas to Europe. That would bring the state a new tax source and potentially jobs, particularly in Georgetown, which is struggling economically. Such an extension would also continue Dominion’s growing reliance on pipeline building for revenue.

Conservation groups are concerned it could also mean building an onshore facility for processing any oil or gas drilled offshore South Carolina — a proposal opposed by most coastal residents, surveys show. It would add to pollution threats in waters already compromised by development.

In a conference call with reporters earlier this year, Tom Farrell, Dominion chief executive officer, called the SCANA purchase a natural fit for his company.

“This combination can open new expansion opportunities, including the Atlantic Coast Pipeline that is now under development, bringing lower-cost natural gas to the region,” Farrell said.

“The state consumes substantial amounts of natural gas, but, because of the large volumes in the interstate pipeline system, almost two-thirds of the supply that enters South Carolina continues on to markets in North Carolina and further north,” the U.S. Energy Information Administration reported in 2017.

That gas comes from the Gulf of Mexico and inland sources through a web of existing lines.

After decades of running natural gas out of the Gulf of Mexico to the rest of the country, fuel companies are now moving natural gas and crude oil the other way, from shale supplies fracked in the Midwest and Northeast. The surplus is getting exported out of the Gulf of Mexico, a small port in Virginia and soon from an even smaller port in Savannah.

Going forward, the 1.5 billion cubic feet of natural gas per day that would run through the Atlantic Coast pipeline is enough to provide the gas to more than a million homes, based on South Carolina gas consumption figures provided by the energy information administration.

With collapse of the nuclear building industry to costs and overruns, building pipelines has become a chief source of revenue for companies such as Dominion, said attorney Will Cleveland, with the Southern Environmental Law Center.

“They have a captive customer who is forced to pay for this pipeline regardless of whether it’s used,” Cleveland said. “They’ve never studied whether they need it. This should give everyone in South Carolina heartburn, given what they just went through with the V.C. Summer plan.”

The financial debacle created by SCE&G while building the now-defunct $9 billion Summer nuclear plants in Fairfield has led to the company’s impending sale.

“After four years of exhaustive study, FERC concluded that the (pipeline) project serves an important public need for underserved consumers and businesses in Virginia and North Carolina,” she said.

FERC Commissioner Cheryl LaFleur voted against issuing that permit partly for concerns about the pollution consequences of supplying natural gas without a proven need, a move she said would increase use rather than meet it.

“I believe the Commission should proactively seek and disclose in pipeline proceedings more information regarding both upstream production and downstream end-use,” she said in her dissent. “In this way, we can work to ensure that our environmental reviews and public interest determinations, including consideration of climate change impacts, are robust and complete,” she said.

Work has begun on the pipeline in West Virginia and North Carolina. The planned route through Virginia has been stalled by a recent federal court ruling that said it hadn’t been properly permitted, and a question was unresolved whether it could legally be run under the Blue Ridge Parkway.

Staff is already “working with the agencies to resolve the 4th Circuit Court’s concerns and reinstate our permits as soon as possible,” spokesman Aaron Ruby said.

“We believe the court’s concerns can be promptly addressed through additional review by the agencies without causing unnecessary delay to the project,” he added.

Conservation groups and concerned residents have battled for three years to keep the Obama and now the Trump administration from opening the South Carolina offshore to oil and natural gas exploration and drilling.

The Dominion sale is a prospect they feared.

Drilling proponents argue the country needs to supplement the oil and gas fields already in place. The United States exports more than 5 million barrels per day, according to the U.S. Energy Information Administration. The country also is poised to become to third-largest natural gas supplier in the world by 2020.

The Dominion sale is a prospect they feared.

Drilling proponents argue the country needs to supplement the oil and gas fields already in place. The United States exports more than 5 million barrels per day, according to the U.S. Energy Information Administration. The country also is poised to become to third-largest natural gas supplier in the world by 2020.

It’s competing with Russia for the European market, according to J.D. Supra, a business analyst.

“It’s very likely Dominion will find a way to get the Atlantic Coast Pipeline into South Carolina. said Peg Howell, of Stop Oil Drilling in the Atlantic, a Pawleys Island-based grassroots group. Howell is a former petroleum engineer. “We are concerned that Georgetown or Charleston would be used.”

“It’s opening a Pandora’s box,” she added. “It’s a human health risk. The process is extremely dangerous. It could be an environmental justice issue, because of the neighborhoods these export facilities have tended to be located near.”

She said natural gas must be turned from gas to liquid for shipping, so “if Dominion drops a natural gas export facility anywhere near our coast it will be a de facto facility for processing natural gas from offshore drilling.”

Editor’s note: This story has been updated to include additional comment from Dominion.