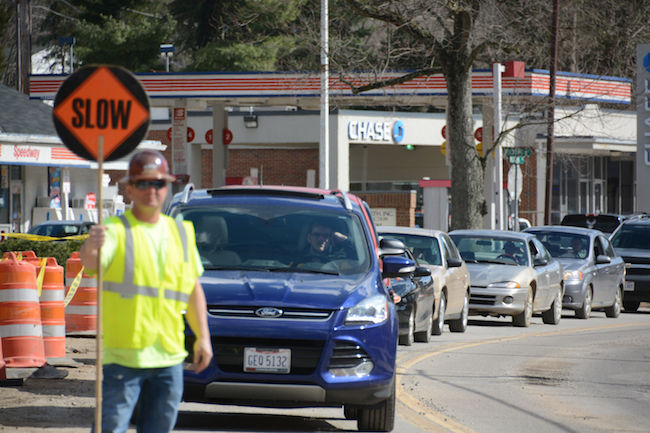 A file photo of traffic on Richland Avenue dealing with the consequences of construction in 2015.Dennis E. Powell

The Frontier North telephone operating company is suing Shelly and Sands, Inc., a construction company, over the severing of lines during excavation work in the road improvements on Richland Avenue in Athens.

The lawsuit was filed July 18 in Athens County Common Pleas Court by Frontier North, Inc., of Columbus, against Shelly and Sands, of Zanesville.

It claims that on July 22, 2015, Shelly and Sands “negligently severed underground telecommunication lines, ducts, conduits, and other utility facilities while excavating and performing other services with mechanical equipment on Richland Avenue.”The suit says the damage was done in the area between the Ohio University Inn and Speed Queen Laundry. Frontier claimed in the suit that the area of excavation was properly marked prior to the excavation commencing.

It also claims that as a direct and proximate cause of the allegedly negligent conduct, Frontier was required to replace and/or repair the damaged lines, ducts, and conduits at a cost of $35,000.

The lawsuit included a second cause of action, reincorporating all of the above allegations and claiming that Shelly and Sands “failed to use reasonable care prior to and during the excavation.”

This second cause of action relates to more damage on a different portion of roadway also on Richland Avenue.

Frontier claimed that, as a result of this damage, they were required to repair and/or replace damaged lines, ducts, and conduits at a cost of $188,000.

The lawsuit asked for monetary relief in the principal amounts included above plus 10 percent interest per year since the incidents.

Shelly and Sands have not yet filed an answer to the complaint.