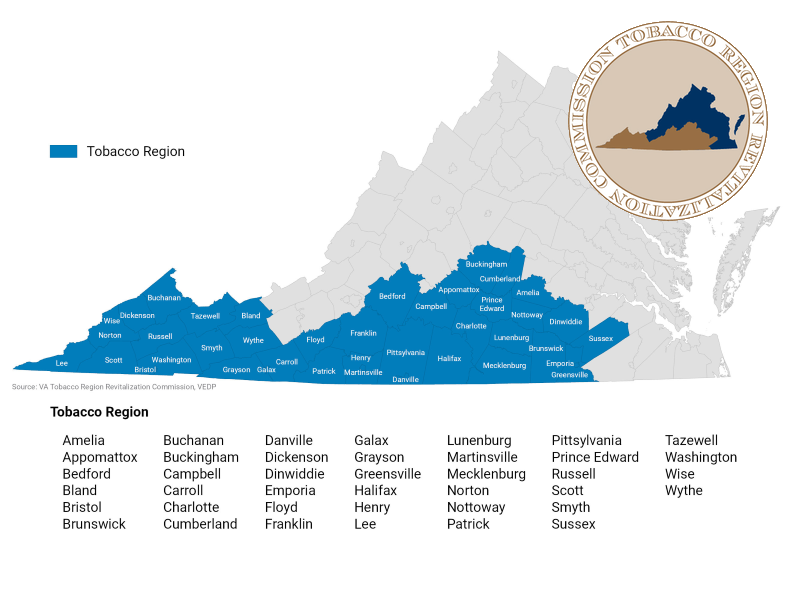 This coming year will mark the 20th anniversary of the creation of the Virginia Tobacco Region Revitalization Commission, and it is an appropriate time to take a look back at what the Commission has accomplished, the work we continue to do, and how we have helped set Southern and Southwest Virginia up for success moving forward.Twenty years ago the outlook for Southern and Southwest Virginia was grim. Everyone is familiar with the story: manufacturing and textile jobs had been lost by the tens of thousands, tobacco — long a mainstay of the region’s agricultural economy — was facing declining demand and coal jobs had been trending downward for decades already as automation and competition from more easily-mined coal continued to push coal employment downward. Something had to be done.

The 1999 Virginia General Assembly created the Tobacco Region Revitalization Commission to help rebuild the economy of Southern and Southwest Virginia. Over the last 20 years the Commission has made strategic investments that have not only produced immediate results by bringing jobs and significant capital investment to the regions it serves, but it has also made long term investments that have set Southern and Southwest Virginia up for success for decades to come.

The Commission has always focused on education as a vital part of developing an economically diverse and successful economy in Southern and Southwest Virginia. Simply put, if you are going to attract businesses to a region you must have a workforce that is ready to fill the jobs that will be created. For that reason, the Commission has invested more than $196 million in our community colleges and scholarships since 2000, acting as a critical source of capital allowing educational institutions to stand up new programs in nursing, IT, manufacturing, and other in-demand fields. Further, the Commission quickly recognized that workforce training and certificate programs to meet industry needs would be critical so it set about offering thousands of scholarships and financial aid packages, lowering the cost of credential attainment across its entire footprint. The Commission also created three regional Centers of Excellence, providing time and curriculum flexible training programs that allow students to obtain industry recognized certifications. Education has always been, and will continue to be, a top priority for the Commission.

While vitally important, it should be noted that education is only half the battle. Workforce training efforts, if not coupled with economic development that gives trained workers employment opportunities, would actually have accelerated the movement of skilled workers away from our region. Through our incentive programs, including the Tobacco Region Opportunity Fund, the Tobacco Commission has helped bring thousands of jobs and Billions of dollars of investment to Southern and Southwest Virginia, including global companies like Microsoft, IKEA, Tempur/Sealy, Goodyear, Aldi and Kyocera SGS along with hundreds of other businesses like TMI Autotech, Press Glass, Oran Safety Glass, Monogram Foods and Empire Bakery. By concentrating on both education and job creation the Commission aims to make sure Southern and Southwest Virginia can offer jobs to their citizens and trained employees to employers from all over the world.

We also know that developing a diverse economy in Southern and Southwest Virginia, our stated mission, isn’t going to happen overnight. Strategic investments are also necessary to create a vibrant, resilient economy. To that end, the Commission has invested extensively in several areas that have set Southern and Southwest Virginia up to be successful for decades to come.The Commission has played a key role in the creation of eight “megasites” throughout Southern and Southwest Virginia that put Virginia in a position to be able to go after large scale projects like auto manufacturers and other production operations that would bring thousands of jobs and hundreds of millions of dollars of investment. A project of this scale would be a real game changer for an entire region and, as a result of these investments along with a strengthening economy, we are regularly being considered for these kinds of projects. We have landed a number of large employers within these sites already and they have attracted a great deal of interest to the region, interest that would not exist if those larger tracts of land were not available.

You’ve likely heard lately about the importance of rural broadband and Governor Northam’s forthcoming plan for functionally universal broadband within 10 years. What you may not know is that the Tobacco Commission has been working to expand broadband access across Southern and Southwest Virginia for nearly our entire existence, spending more than $130 million in support of broadband infrastructure. These efforts began with the creation of Mid-Atlantic broadband in 2004 to build and operate crucial backbone fiber infrastructure for our region and most recently include $11 million for projects just last year that will connect over 31,000 homes and businesses. Broadband access is vital to attracting companies and their employees to rural Virginia. Like electricity and water, companies simply will not locate in an area that does not have a fast broadband connection. Moreover, broadband at home is crucial if we are to close the so called “homework gap” and offer students in our region the same opportunities their urban counterparts enjoy.

In addition to helping provide education and job training for rural Virginians, working to attract employers big and small along with the jobs they bring, and expanding broadband access, the Commission has also invested in improved access to healthcare, high-impact tourism projects, critically important agricultural assets and research, and direct programming to support business attraction efforts. While not every project has always borne fruit, we’ve gotten even more selective and rigorous in our approach – hiring a data scientist, introducing hard metrics into every program, and adopting best-practices from across the funding and economic development landscape. As we look forward, we recognize that while there remains work to be done, the Commonwealth can be proud of the accomplishments of the Commission, and we look forward to continued years of supporting the best projects possible to revitalize Southern and Southwest Virginia.
‍