Thank you for your interest in learning more about preventing damages with our products. We will be in touch shortly to schedule your Digital Demo.
Oops! Something went wrong while submitting the form.

The Argument for Specifying Marker Tape 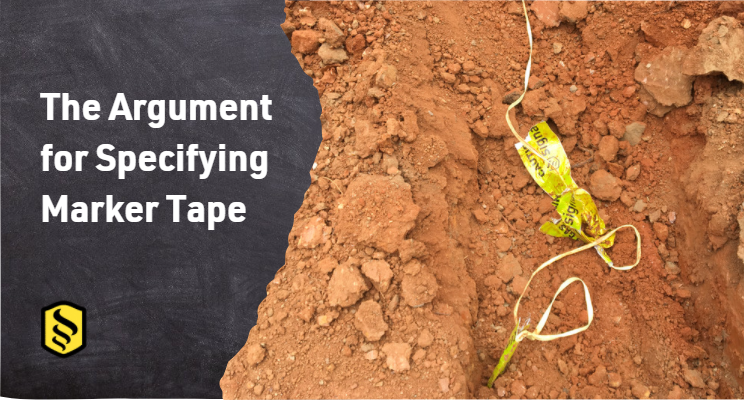 Excavation damage is a serious and multifaceted issue. In 2019 more than 450,000 damage incidents were reported to CGA. Reported costs often do not encompass the indirect costs to local communities and businesses, which often make up over 90% of the financial impact of these events. In 2019 (the last year in which this data is publicly available) these societal costs were estimated to be $30 billion.

The 2019 DIRT Report revealed the three main causes of excavation damage were: failure to notify the one-call center, failure of the excavator to maintain the appropriate clearance, and facilities being marked inaccurately due to locator error. This is despite awareness of call-before-you-dig being at an all-time high. These three main causes all have one underlying factor in common: safe excavation ultimately relies on human compliance and accuracy.

What is the problem with traditional tapes?

Traditional marker tapes do little to prevent damage once an excavation has begun as they shear underground. This means the process relies on the excavator or a crew member to notice a relatively small piece of exposed plastic to be alerted to the existence of a buried facility and call off the excavation process, and that is if the tape becomes visible. Tapes often advertise their elasticity or the strength of plastic used, however, this does not translate to real-world performance, rather these kinds of materials shear underground like any other traditional tape.

While there is no singular solution to excavation damage, the Common Ground Alliance, the industry’s leading organization in preventing excavation damage, has shown through their data-based approach that efforts need to be made in every step of the excavation process to create real and lasting change.

Failure to notify a one-call center is the most common cause of excavation damages, therefore it is important to consider damage prevention methods that ultimately do not rely on compliance. Although best practices should always be championed and adhered to, rules and laws only go so far in changing human behavior and preventing human error. This can be done through the requirement of a high-performing, locatable marker tape for all underground utilities that is capable of being held to more stringent standards than traditional marking tapes which are made of only extruded plastic.

What technologies make a functional tape?

1.) Core Material in a Sinusoidal wave.

Requiring a marker tape that contains a high-strength core material in a sinusoidal wave provides a direct and immediate warning to the excavator by preventing the tape from shearing underground. This is a greater value than a marker tape that is designed for strength or elasticity, both of which do not generate the same robust warning a strong core material does. The performance of the tensile strength of core material can be confirmed using ASTM D6775.

Configuring the core material in a sinusoidal wave ensures there is slack which is important because when the tape is pulled to the surface, the extra length is created before having to rely on the strength of the core material, giving the device greater endurance and reliability with the equipment it is designed to encounter. When other tapes shear, the visual warning gets lost or hidden in the dirt but designing a tape to pull to the surface allows for the tape to create a robust visual warning to get the direct attention of the excavator.

The sinusoidal wave pattern also allows the tape to function regardless of the angle of approach by creating a larger effective area. This is another point of contrast as traditional tapes are not engineered to function against parallel strikes.

One of the leading causes of damage is due to locating issues prior to excavation. Consistently requiring tape to be locatable can help remedy this issue. Location devices do not do anything to stop an excavator once digging has begun, but with compliance, they can help prevent a utility from ever being encountered.

Including a location device within marker tape is supportive of best practices, as it helps to aid the locator when they are dispatched by 811. It is more efficient than referring to utility maps alone which can provide greater opportunity for human error at multiple stages in the process, which may not be recognized until it is too late.

Tracer wire can assist in the locating of utilities prior to excavation which greatly reduces the likelihood of encountering them in the process. Embedding tracer wire in tape is advantageous for a number of reasons including keeping tracer wire and pipe separate and holding tracer wire straight as it has a tendency to recoil. Tracer wire embedded in tape is greatly beneficial over traditional locatable tapes made with aluminum which is prone to degradation and therefore not equipped to last the life of a utility.

Radiofrequency (RF) path markers are another option that can not only locate but identify specific utilities. This is because RF path markers come in several unique frequencies so each utility type can be distinguished. When using an appropriate locator it is possible to discern not only the location of a buried utility but its general identification. This is especially useful when utilities are close together.

Locatable marker tapes typically only serve to help when compliance is being taken seriously. Like any other device, they have some potential to fail and when they are encased in or with a traditional tape there is no fail-safe in place beyond that point to prevent damage. For this reason, locatable tape with a high-strength core material is recommended to assist with best practices and to be present for times when they are not heeded or when past malpractice has damaged location devices.

Hydrophobic materials are commonly used in many different industries as they can significantly improve the performance of an end product. Marker tapes comprised of hydrophobic materials discourage mud and dirt from clinging to the tape, increasing visibility. This helps to ensure that not only the tape’s legend can be read but that the tape itself can remain distinctly identifiable.

How does an effective tape differ from other damage prevention options?

Marker tape with a core material is a more cost-effective solution than other damage prevention methods. Using a high-strength core material provides a greater means of interference than other tapes and methods, which is important in strategizing to reduce the risk of costly accidents. Excavation damage is not limited to the cost of damages on utilities themselves but has the potential to have far-reaching effects. When viewed through this lens the greater cost of more formidable marker tape is insignificant in comparison to other damage prevention methods that serve to intervene when compliance is not achieved.

One alternative is colored dirt, which while also providing visual warning is expensive to transport and labor-intensive to install. It also provides no tactile warning to the excavator while core material in a marking tape has the potential to feel noticeably different when the excavator encounters it.

Another option is remote surveillance systems that do not communicate directly with the excavator. This greatly complicates their ability to immediately interfere with the excavation process which is complicated in a situation where urgency is critical.

Integrating multiple functions into marker tape allows for a reduction in products and therefore fewer steps in the installation process. The installation of marker tape is relatively straight forward and installing only one product is not only faster than installing multiple but means there are fewer products to source and arrive on-site to move to the next step in the construction process.

By specifying all marker tape to be locatable, it removes the efforts of considering if it needs to be a requirement in each project and increases consistency. Increasing consistency and simplicity in utility marking methods can be greatly beneficial to reducing the burden on locators, which is suspected to be a significant factor in excavation accidents that occur each year.

Combined with best practices, an updated specification for reinforced, locatable marking tape is an investment for the future.

Next week we are headed to the Texas 811 Damage Prevention Summit in Denton, Texas at the Embassy Suites by Hilton - Denton Convention Center.

We custom print every order of our marker tapes and offer short lead times.

Every wonder how Signaltape® compares to other marker tapes?